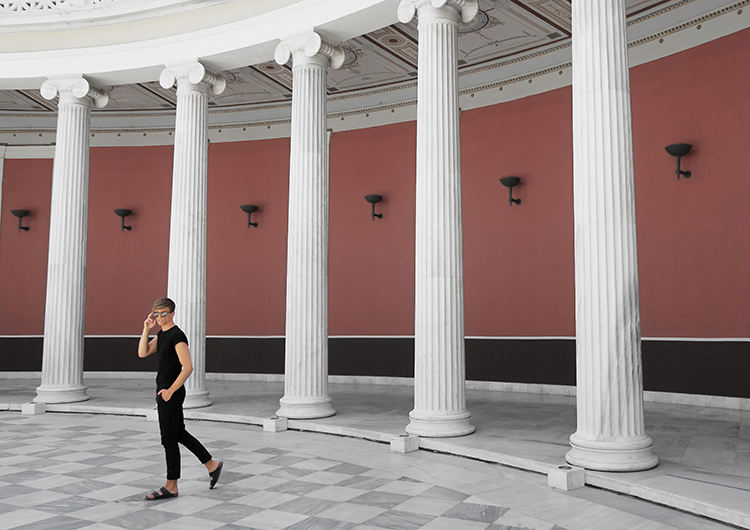 I have never been to Athens my entire life but this August I have been there twice, because two is always better than one. The first time I stayed two nights in the hotel I made a review on a few days ago on my website, the NEW HOTEL, which was amazing. I loved the modern touch with all the artistic influences. The second time we stayed in the incredible GRAND BRETAGNE HOTEL, which has one of the most beautiful entrances I have ever seen to. The whole hotel is very classy and chic, old fashioned in a very very positive way. However when we arrived in Athens and before we checked in we had a 40 mins cap drive from the Airport to the hotel. On the airport was a sign that all the routs costs 38 EUROS. Our driver thought we didn’t see it and wanted to get more money of us, which we didn’t pay obviously. We told him that we already know the offer-prices of the caps in Athens, so this was not working.

That’s just a tip for you guys if you ever go to Athens, don’t let yourself get exploited. After coming to the hotel we discovered the centre for a few hours. 36 degrees and no sleep almost killed me because our flight denatured at  6am, means waking up at 3am. Well, back to the city. Athens is different than i expected. In my head it was more historical, nicer architecture and of course much cleaner. But the reality looked different. There are some cute little streets I’m not gonna lie, but most of the streets I’ve seen reminded me of a bazar. There were not a lot of normal stores, just the ones which offer no brand clothes – if that makes sense.

I bet the National Garden of the city looked nice a while ago but atm it looks like no one really care about it anymore. It was quite overgrown and most of the fountains were super dirty or not even working. Greece is in the middle of a crisis and unfortunately you can feel that in Athens. Nevertheless there are also some very pretty and cute places I photographed for you guys. Some fascinating historical buildings as the Temple of Olympian Zeus or the Acropolis. It was unreal to stand in front of this ruins. It sad to see whats left of this once great buildings. I’m going to tell you guys some places I liked the best besides the historical things. So you can check them out if you’re going to Athens.

Rooftop Restaurant and Bar 360 – hip and trendy place to be with an amazing view on the acropolis.

Restaurant Dionysos – lovely place on the other side of the Acropolis.

Acropolis Museum – I loved the architecture of this museum so much that I couldn´t concentrate on the exhibition from time to time.

All in all it’s worth to be there once in your life, but you don’t need to be there longer then 4 days for sure, rather use Athens as a stop between.