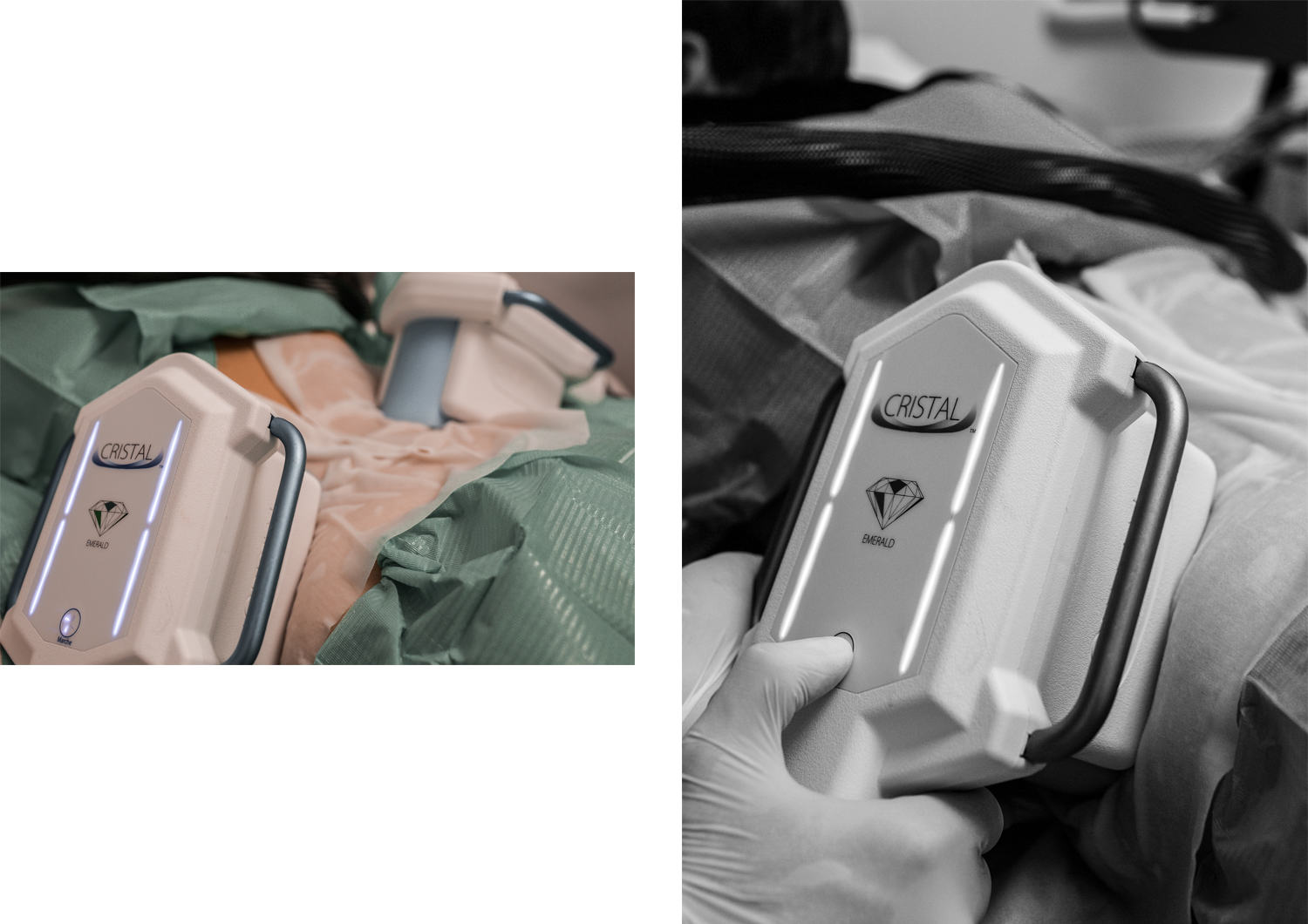 It’s been 5 months now since I had my first cryolipolysis treatment at ICE AESTHETIC in Berlin. People who follow me on Instagram knew that I had my first ever treatment in March, because I took you with me on Instastory, showing you the succession of the treatment. I want to talk about it because it’s time that people stop to be afraid of treatments and start to talk about it. It’s nothing to be ashamed of. I know a lot of Influencers who lie about their injections and surgeries, but I’m not one of them. It’s a super interesting topic and I don´t make a secret out of it. CRYOLIPOLYSIS AT ICE AESTHETIC IN BERLIN.

WHAT KIND OF TREATMENT IS CRYOLIPOLYSIS?

What kind of treatment is it you might wonder. Cryolipolysis is a non-surgery way to get rid of unwanted fat by freezing fat cells. You get rid of more or less 20% of fat cells after one treatment. So it’s no magic, more a body shaping intervention. It always depends on how the body reacts to it.

Does it hurt? How long does it take? And how is it even done?

This and many more things I’m going to answer right now with this article.telling you my experiences. First, I let you know why I did it, because that’s the most interesting fact for many of you. 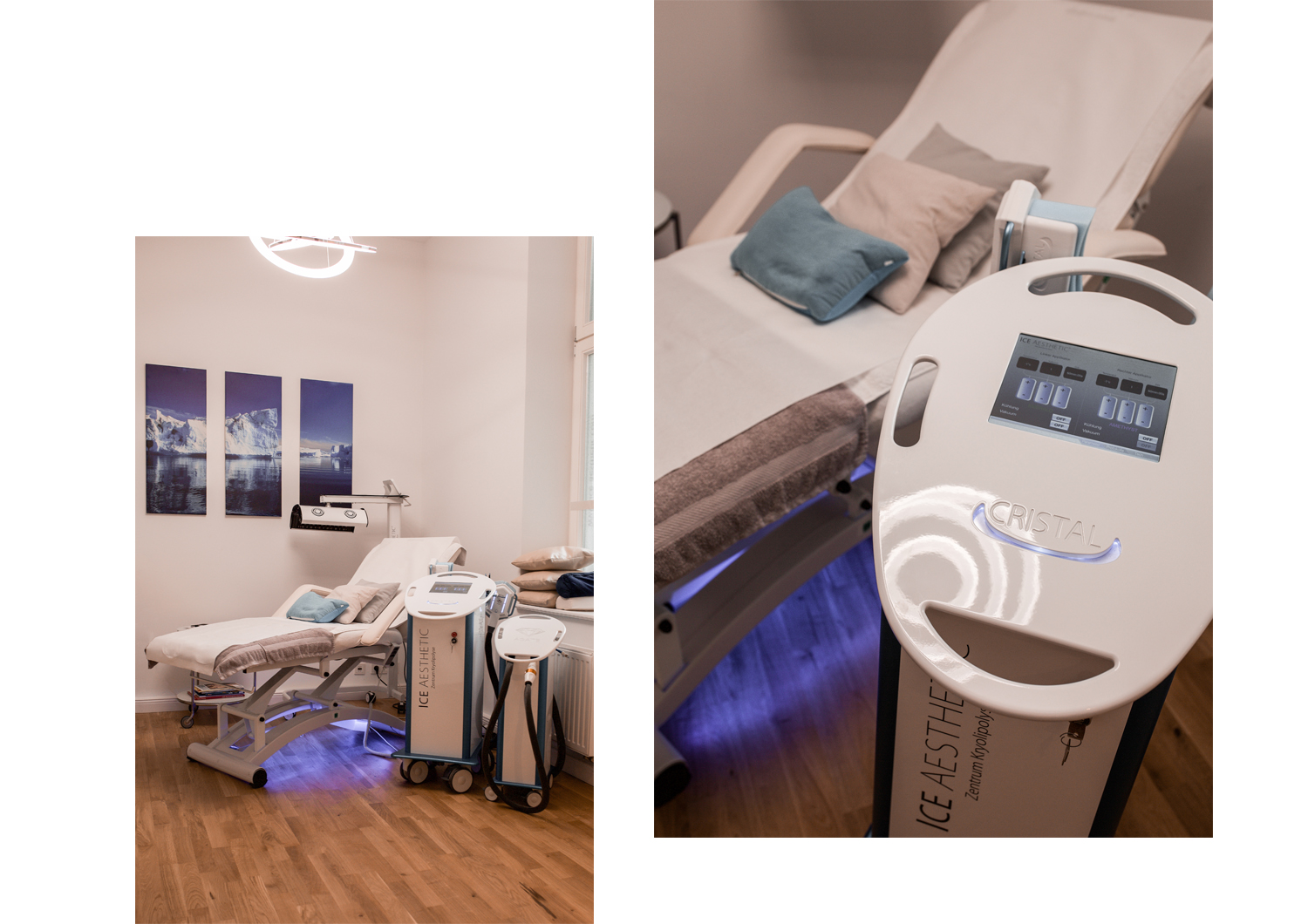 WHY I DID IT

What? You did what? You don’t even have fat? Look at you, you are super skinny!

That and many more reactions I got from people when I told them that I froze fat to get rid of it. I know that I appear ‚super‘ skinny, but we all have this parts on our body where we can’t get rid of unwanted fat. I tried a lot – eating healthy, worked out 4 times a week for couple of months. The result – I was in a better shape, but my love handles still remained. My problem areas are my lovehandles. I just wanted to get rid of them for good after trying so many things. When I heard about cryolipolysis I knew I had to try it. And why not? It’s a non-surgical way to get rid of something that bothered me for years. Its worth testing it, right?

My first treatment at ICE AESTHETIC in Berlin took place on the 22nd of March. I was warm welcomed by Erik, who also provided the treatment. We started with an about 30 mins pre-treatment consultation which was very informative. He measured the circumference of my pelvis, measured the fat content of my love handles with a special tong, which is called caliper, taking a before-picture and I went on a special weighing scale that showed water/muscle/fat content of my whole body. 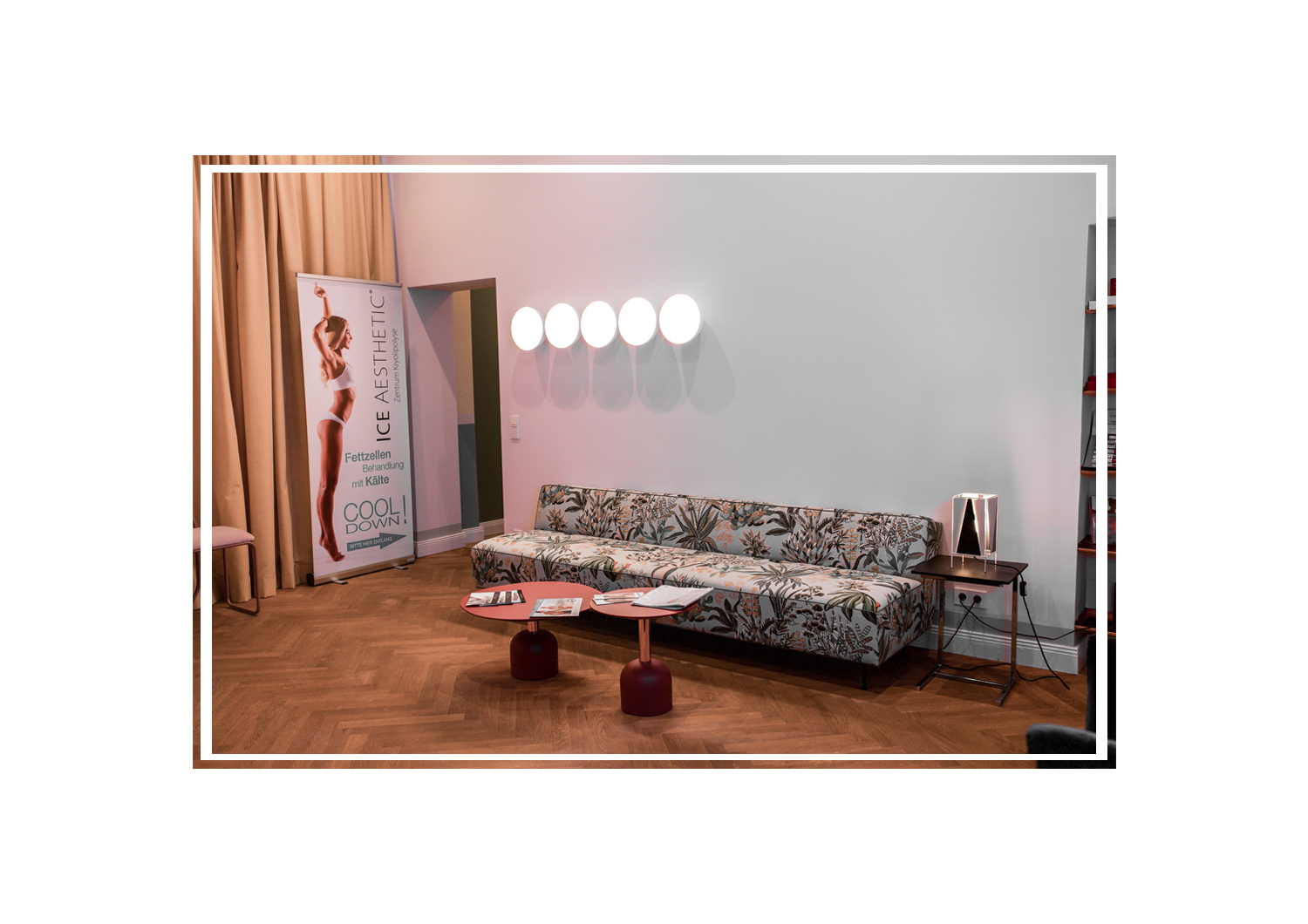 Time to start the treatment. In front of a mirror, Erik was marking the parts that got sucked in by the machine. After that I walked to the medical bed and lay on my stomach. Erik started with disinfecting the parts which will be frozen and put an antifreeze layer + antifreeze gel on my love handles, to protect the skin from freezing. After that he showed me how the machine works, so I really could see how careful they work with their clients, giving you the best possible feeling. The procedure started with the first applicator that sucked in the fat spot with a vacuum, followed by the other side. The great thing at ICE AESTHETIC is, that they can work on both sides of my body, for example both hips, at the same time with two applicators. 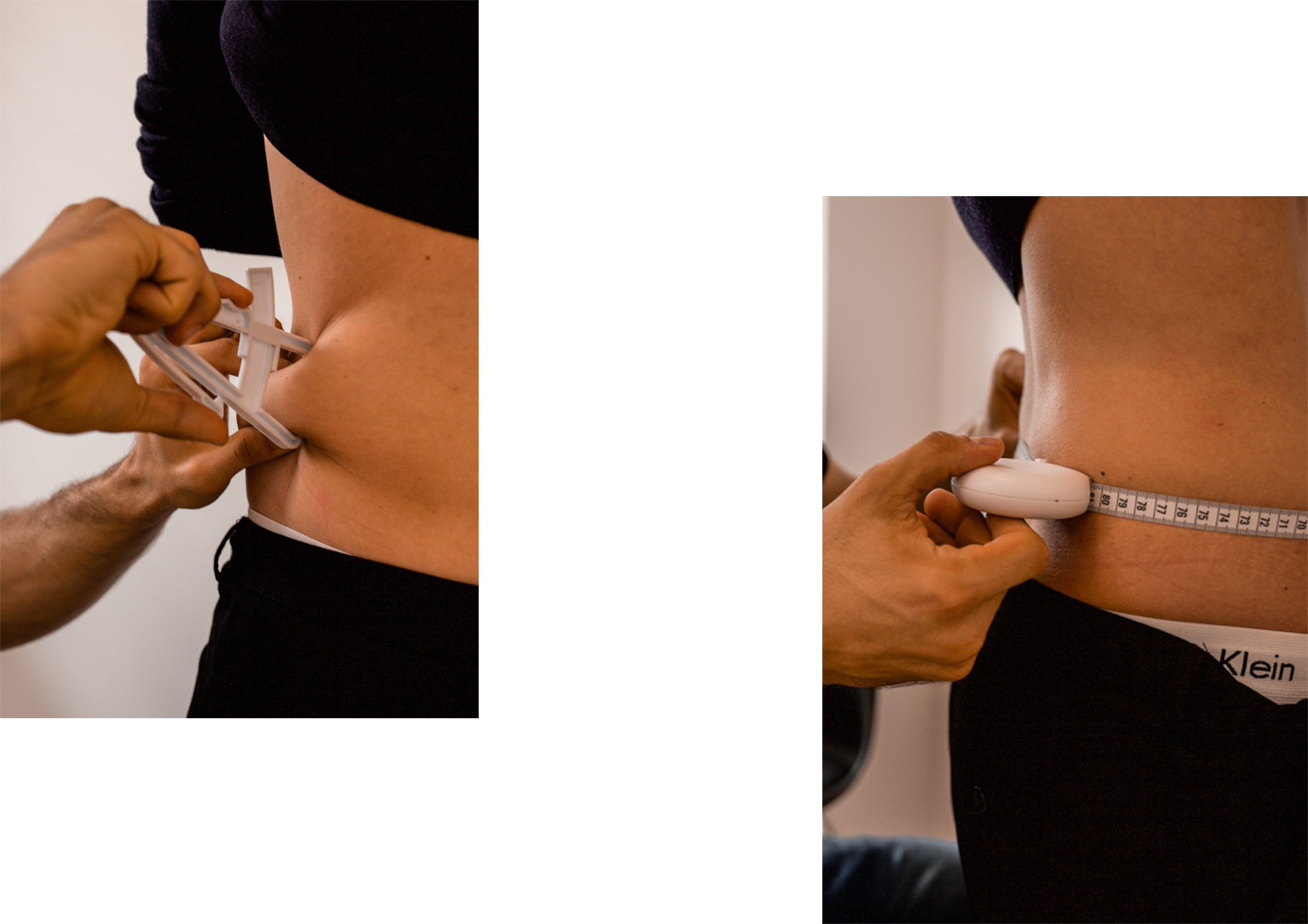 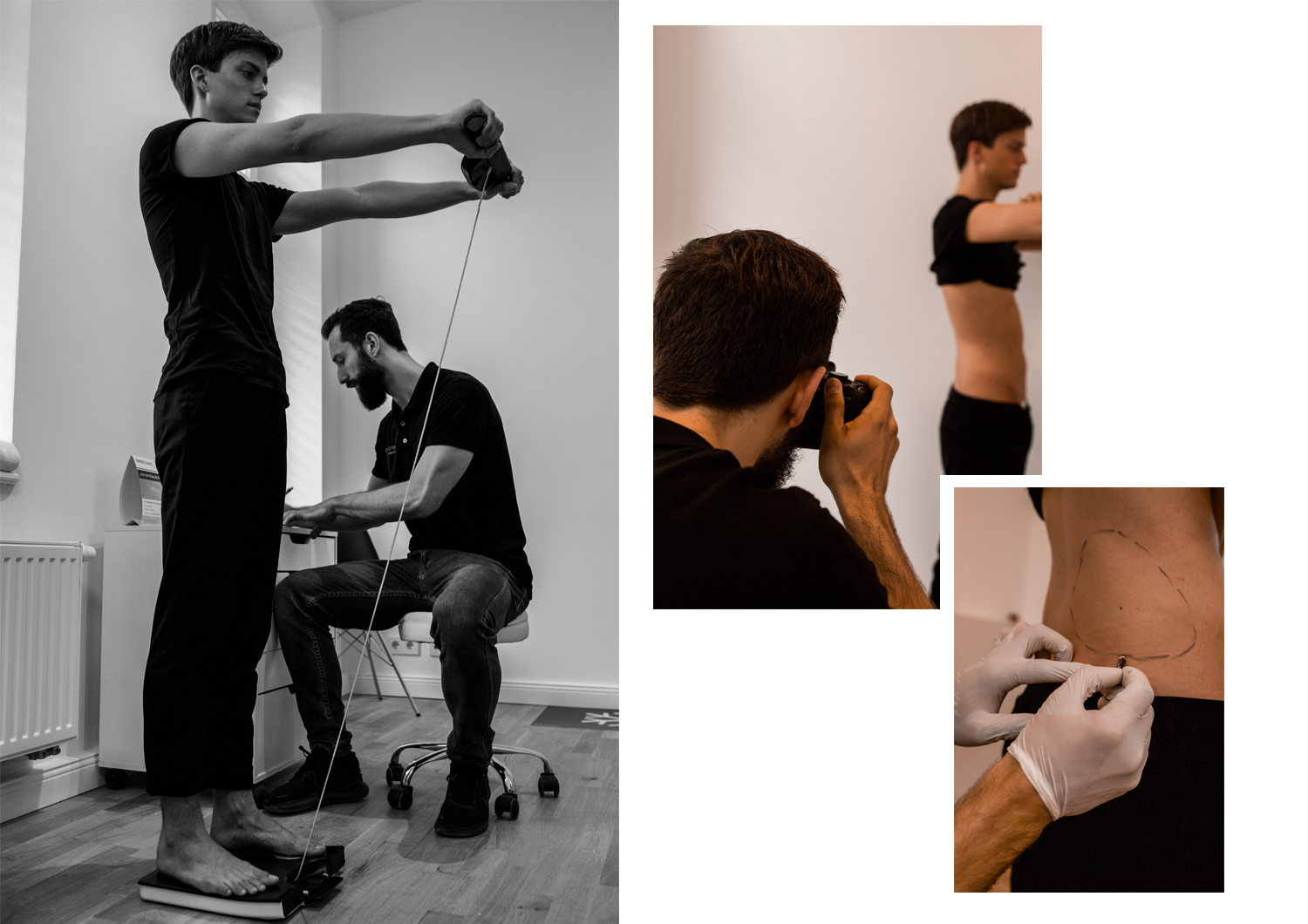 TIME FOR THE FREEZING OF FAT CELLS. I felt a bit of pressure for sure, but in my eyes, it didn’t hurt at all. After Erik checked again if I still felt comfortable with the pressure, he brought me something to drink and an iPad to watch movie or just browse the web. The treatment took about 70 minutes, so I had to get busy or otherwise I would have bored myself to death.

The zones got numb after a few minutes and then I didn’t feel anything at all. After 30 minutes he came back checking on me and put the vacuum one step higher for a better result. He just increases the pressure if you really feel comfortable with it, so it’s up to you. After 20 more minutes he came back again and put the applicator away to see how frozen my love handles already were. They were not on the perfect point yet, so he applied them again for 15 minutes plus pushing the vacuum another step higher. AND DONE. 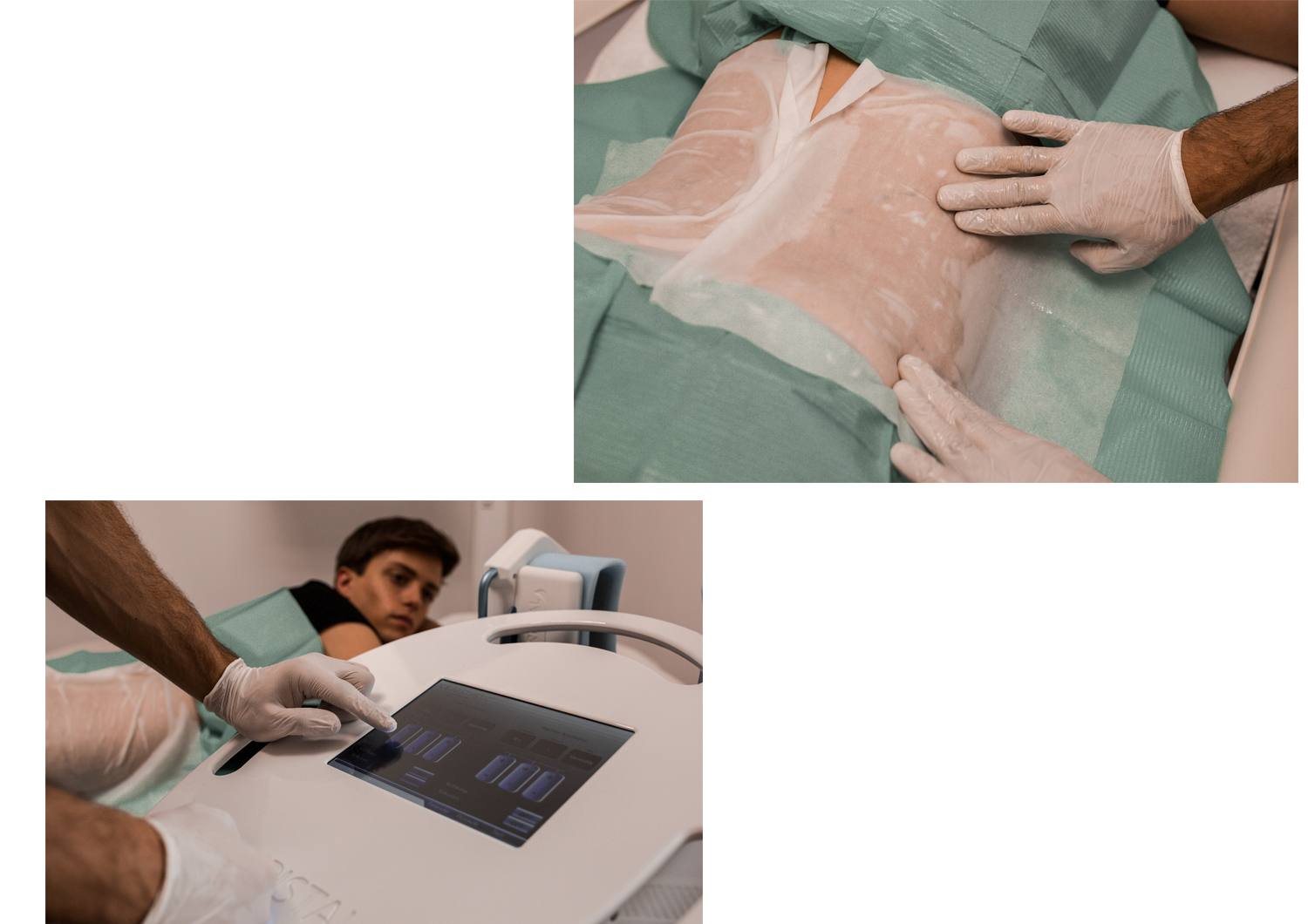 Removing the applicators and seeing the frozen parts of your body is quite weird because there are two iced skin cubes on your body. With a shockwave therapy he massaged the iced parts until they went back to normal. I have to admit that the shockwaves were most unpleasantly of all, even if it wasn’t that bad.

Straight after it was quite red but that went back to normal after an hour or two. The zones felt a bit numb and cold, and it felt a bit strange when I put my clothes back on to be honest, but I got used to it. The numb feeling stayed for a bit and I could especially feel it when I were jumping – I just jumped out of curiosity. I already booked a second treatment for the next month at Ice Aesthetic, because Erik told me that one month after the treatment, it’s the best time to damage even more fat cells.

The result is about 20%  to 30% less fat per treatment but you have to work on it as well. There are some rules you have to stick with. For example, drinking 2-3 liters of water a day, so that the fat cells can be faster dispatched through lymphatic circulation. What I also tried to do is working out more than before and eating a bit healthier. I had some interruptions for sure but tried my best. Interval fasting is also a good idea for that time. In the first week you should try to avoid going to a sauna or intense sunbathing.

I’m quite happy with my results, my measurements changed from 84 cm to 81 cm on my hip. I lost one clothing size and I feel way more comfortable now. As you can see on the pictures it really changed and looks way way better than before.

I can really recommend this treatment at ICE AESTETIC in Berlin. The stuff is amazingly nice and welcoming. The procedure is not painful at all, plus you are ready for action again immediately after the treatment. 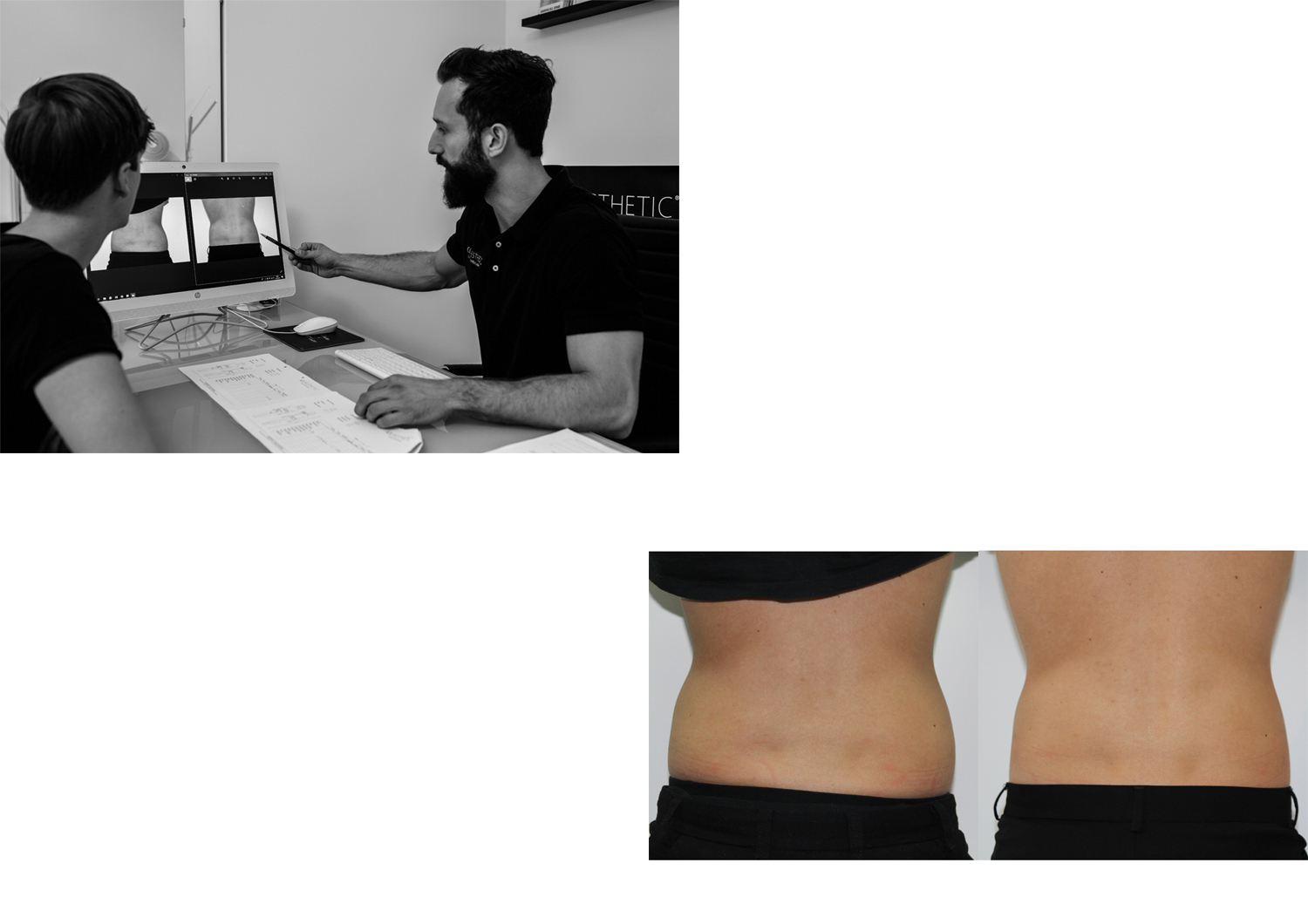 Now we come to the costs, because that’s also quite interesting. One zone (both love handles for example count as one zone) costs less than 600 euro, which is totally worth the money and not that expensive if you think about it. ICE AESTHETIC also has other locations around Europe,  if you’re not from Germany and want to do it anyways.

If you have more questions just write them below in the box and I’m going to answer them.